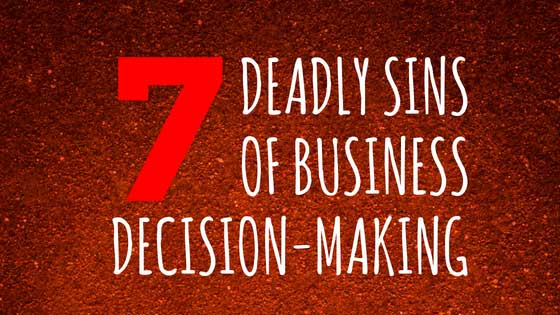 As many of you who will have read my June Monday Motivation will know I have been going through some old files. What memories! However they also reminded me of how often the basics of business still remain unchanged. And one such area is in the way we make business decisions. Why is it that so many companies keep making costly mistakes?

The reasons business people make the wrong decisions, in fact, stems from a multiplicity of causes. A colleague of mine, Deborah Sawyer, a number of years ago identified seven deadly sins of business decision-making that alas are too familiar to us all.

Symptoms include –
a) familiarity breeds contempt;
b) arrogance in that we would never go outside for information – we have it all in-house!
c) “old boy’s knowledge”.

REMEMBER: Asking the wrong quesiton is not such a sin if a company is willing to recognise the mistake, backtrack and then go forward.

3. Old Demon Ego– Decisions which companies should never take, and would never take if egos could be set aside, do get taken because decision-makers can’t give up their pet ideas. Whilst decision makers often know they should go and get some objective input to test their idea, they deliberately avoid doing so. That’s becuase they know an input of information will likely show up the flaws in the project. That would mean they would have to abandon the idea!

Symptoms include:
a) winging it overseas
b) rushing with a product lauch/project
c) leaving it too late

It is important to remember here that most readily available information is generalised and intended to inform in a general way. Rarely is generalised information, which just about anyone can access, tailored enough to support business decision making, which has to occur in the context of a paritcular company’s situation.

5. If It Works for Them, It’ll Work for Us (All Aboard the Bandwagon)– Rather than undertake soul searching to find the right choices, a company instead looks around at what others in its industry have done and simply mimics them. By imitating what others do, there is no need to take an idea and test it in the context of your own company to see if there is a fit.

Some symptoms include:
a) following the fashions
b) safety in numbers
c) why is no-one else doing this?

6. Hear No Evil – Another way companies avoid making the right decision is by making sure they never hear anything unpleasant. We all know this one and some of the symptoms include:
a) don’t tell me what I ask to hear!
b) shoot the messenger

7. No Decision Can be the Same as a Bad Decision (Hurry Up and Wait) – Failure to make a deicison does not just mean a lost opportunity. It can also take away the chance to take corrective action to an existing business situation.

Symptoms include:
a) decision drag (also known as procrastination)
b) head in the sand
c) eye off the future

Do you recognise any of these in your business? Every company and every industry runs the risk of thinking that the current status quo will continue. Many decisions taken or not taken rest on this assumption.

Get in touch find out how MindShifts can assist you and your organisation to make better decisions. Take action today!

Are you looking after yourself?
Scroll to top